Regaining your athletic ability after the procedure. 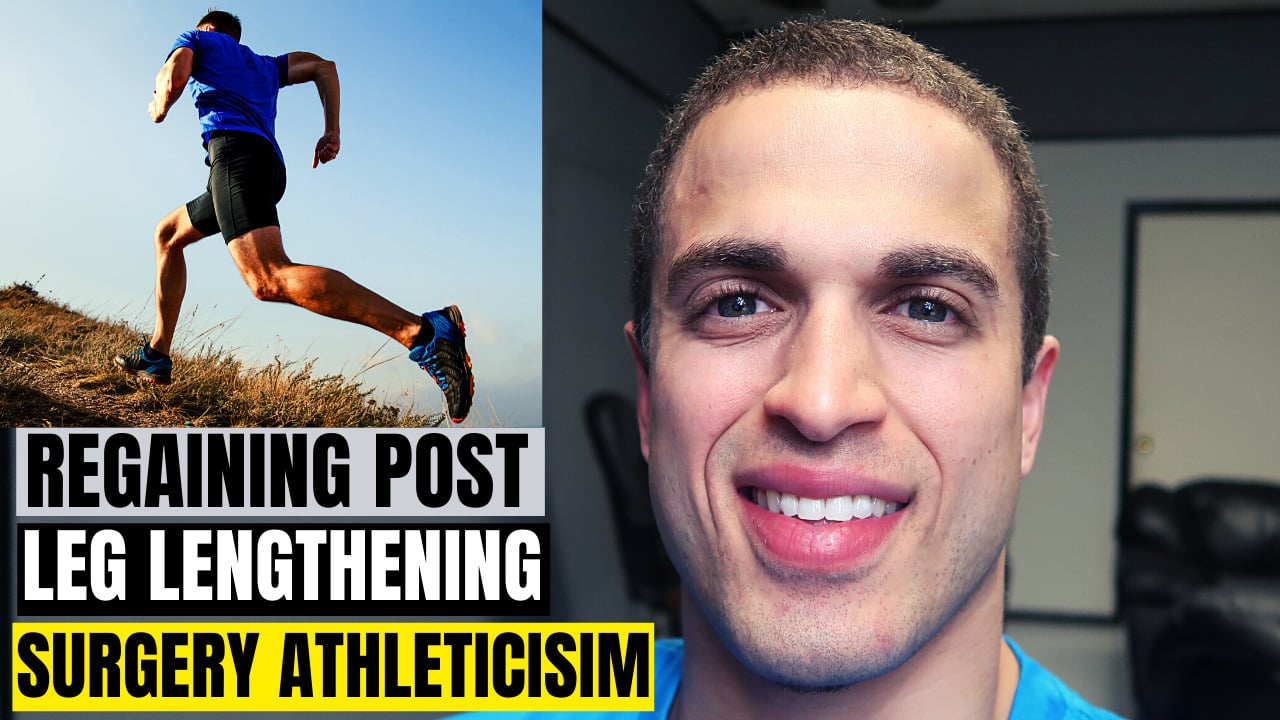 A lot of factors play into it, such as how much length you got, how much effort you put into physical therapy rehab, how much your biomechanics will change after surgery, how good was your nutrition, the type of lengthening procedure you got done and finally just giving yourself enough time to recover.

So before we begin, what does it mean to regain your athletic ability? Well, different things for different people. For some people it may mean getting back your full muscle strength and being able to squat as much weight as you did before surgery while others it could mean being able to run, jump and do other activities requiring agility, and some people just care about doing basic tasks around the house.

Now, I do want to mention that... you technically won’t be the same after limb lengthening surgery, but that doesn’t necessarily mean you can’t do the same things you used to. It’s kind of confusing and I’m gonna explain as we go…

Also, I’ve recently spoken to quite a few limb lengthening patients, currently going through the process, and so I base a lot of this on what they told me.

So “what’s the big deal with pushing a centimeter or two more past conservative.” Well, for one, when you max out the “reserve slack” in your muscle length, you can get very tight and impact your active ROM; things like hip and knee flexion can be restricted making things like a deep squat harder for some time. And then you might be thinking, “what if I just do the tibias, then I won’t have to worry about tight thigh muscles” unfortunately that’s not really the way it works as the entire Posterior Kinetic Chain is connected. You lengthen one limb whose muscles are affected, all limbs, above or below, are affected to some extent.

And from the patients I spoke to, they all say the last cm or two is downright brutal because of the tightness in the muscles and soft tissue. But even though they experienced some lengthening pain and discomfort in the knee from having tight IT bands or restricted knee flexion from taut hamstrings and calves, they find that being diligent on their therapy is key to get back their old abilities.

How serious you take your rehab. See I think a lot of people misunderstand the therapy aspect of this procedure. Now, I’m not going to go preaching too much about it today, but if you simply go through the motions of therapy and don’t intentionally push yourself to regain your ROM, strength and overall function of your limbs, then you might get rid of the lingering surgery symptoms but not get your athletic abilities back.

One of the guys I spoke to has the internal stryde nail whos just about at full length of 8cm, mentioned he’s doing 7 days of rehab, he tracks his steps of 5000 to 7000 per day, he focuses on good diet with high protein intake and he’s constantly working to rebuild his lost muscle strength, especially in the glutes, where there’s a pretty big loss of muscle from being out of action for a while which can also cause a bit of a funny waddle to your walk.

But when I asked him if he thought he would make a full recovery he said, “Victor, it’s more mindset than anything, the mind could be your greatest asset or your greatest enemy” and that yes, he believes he will and I 100% agree. The more you put into rehab, the more you’ll get out of it. I did the same thing for my limb lengthening procedure - all about that “mental manifestation.”

And the good news is, almost all of these patients are expecting to make a full recovery after the procedure saying things like we’re faced to go through tons of disciplined rehab for LL and when we’re healed, we take that same mindset and are willing to work harder and thus end up being able to do the same things as prior to surgery regardless of going conservative for 5cm on the femurs or extreme with 8cm on the femurs.

Altered biomechanics which is a result of cosmetic stature lengthening the way you move your body around and how much force is required to do so, is going to be different than it was before surgery. This isn’t usually a huge problem for the average joe who just wants to be taller and live life normally, you know; get up, go to work, or even do a soft jog every now and then. But when it comes to the more advanced athletes, guys who are willing to get under a squat bar loaded with a few hundred pounds or sprint and play sports, it can be a huge deal.

So without going too deep, when you lengthen your bones, you are altering physics of your anatomical structure and thus movement patterns.

So how can this affect things? Well it can make your balance feel a bit off for doing physical tasks such as ones that require balance. The good thing is your body can usually adapt pretty quickly and pretty well to these changes and within a year you should be fully adjusted. To expedite this you could do some proprioceptive training.

In fact, the patients I spoke to say they notice the difference but don’t feel it’s something that will prevent them from regaining their athleticism or balance to do what they used to.

I’ll use the example of squatting and femur lengthening to help explain this scenario a bit more as you might run into it.

So a lot of expert kinesiologists believe that longer femurs and a shorter torso will result in a more forward lean in squatting, kind of like a low bar squat, thus engaging the posterior chain muscles like hamstrings, glutes and lower back more than the quads. This might make you think that if, before surgery, you squatted with a rather standard stance and high bar position on your traps, then after surgery, you may have to sit your hips back more to achieve the same depth.

While this is somewhat true, if you modify and take a wider stance and break at the knees before the hips, you can expect to be able to get into a full depth squat without an excessive forward lean, even if the knees track forward a bit, it won’t cause too much shearing forces because of the foot placement or hip positioning. Of course you would need maximal flexibility in your ankles, but at least you would only have to really change one parameter; the foot stance or how far your hips go back. And after all, the only thing that really matters is the bar path. Straight up and down. See, doing the same thing even though you’re not the same...it’ll just take time.

I never understood why people who undergo a big physical endeavor like limb lengthening surgery don’t take their nutrition seriously enough. Muscle strength is directly tied to enough caloric intake, specifically protein. When you want to get your athleticism back you don’t want to simply “eat enough” to hold your weight. Rather you want to focus on keeping protein levels high enough to slow atrophy and regain strength. Besides that, drinking enough water is super important as it’s a large component of muscle tissue. So, focus on a lower carb, moderate fat and high protein diet during LL - and you’ll come out of it a taller, ripped beast ready to get your physicality back.

The main differences between limb lengthening for cosmetic vs. discrepancy purposes is that cosmetic is to ease psychological pain of having a relatively short stature while discrepancy lengthening is to cure an actual physical problem. Patients with LLD have to “pay up front” with years of pain and discomfort risking long term arthritis and muscular imbalances until they get their procedure done, while CLL are “billed in the rears” and are more at risk for losing athleticism after surgery. When it comes to regaining your athletic ability, both can do so, through enough time, rehab, and training like proprioceptive and balance exercises because there is an adaptation period for getting used to your lengthened limbs.

Doing things will feel much better for a LLD patient than it had in the past, while it will feel much different for a CLL patient until they get used to it usually within 6-10 months post consolidation.

Giving yourself ample time to recover vs. a hard stop timeline like having to get back to work or school is going to affect how soon you regain athleticism. Typically, you want to be able to walk normally and have full active ROM by month 5-6 and then gradually scale up from there. You never want to skip or rush your recovery timeline.